{A "Gotta" Read} The Auschwitz Escape (a novel) by Joel C. Rosenberg 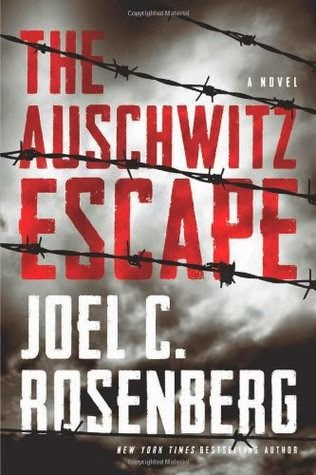 Book Description:  A terrible darkness has fallen upon Jacob Weisz's beloved Germany. The Nazi regime, under the leadership of Adolf Hitler, has surged to power and now hold Germany by the throat. All non-Aryans -- especially Jews like Jacob and his family -- are treated like dogs.
When tragedy strikes during one terrible night of violence, Jacob flees and joins rebel forces working to undermine the regime. But after a raid goes horribly wrong, Jacob finds himself in a living nightmare -- trapped in a crowded, stinking car on the train to the Auschwitz death camp.

As World War II rages and Hitler begins implementing his "final solution" to systematically and ruthlessly exterminate the Jewish people, Jacob must rely on his wits and a God he's not sure he believes in to somehow escape from Auschwitz and alert the world to the Nazi's atrocities before Fascism overtakes all of Europe. The fate of millions hangs in the balance.

My Thoughts:  Joel C. Rosenberg writes with a death defying description that left this reader gasping for breath and a rapidly beating heart.
The scenes, the senselessness of it.all, the hope, the courage and the escape!  Oh!what!a!read!
Reading about WWII is a passion of mine but when an author like Mr. Rosenberg writes a novel that feels so real, that feels like it took place yesterday, and when the events seem as if they could be happening right now, in this very country....well, the reader may, just as I did, gently close the book, take a deep breath and timidly open the pages again to read about Jacob.
Ah!  This was not an "easy" read for me.  Breath taking, heart pounding, mind boggling...how could people...how could one man {Hitler} be so cruel!??!  Why would people follow a mad man?!?! How do these atrocities come to pass?!?!?
At times it was hard to read but yet, hard not to read!  Wanting to know what was going to happen but barely daring to breathe...now that's a book that begs to be read by all!
What a read!