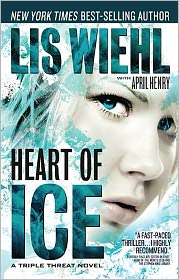 Book Description:  Fans of James Patterson's Women's Murder Club books will find the same friendly crime-solving vibe in Wiehl and Henry's appealing third Triple Threat novel (after Hand of Fate) featuring federal prosecutor Allison Pierce, FBI special agent Nicole Hedges, and Portland, Ore., TV crime reporter Cassidy Shaw. At the Portland Fitness Center, Cassidy joins the boot camp class run by the beautiful instructor Elizabeth Avery, unaware that Elizabeth served time in a juvenile facility for two horrific crimes committed at age 13 when she was known as Sissy Hewsom. The icy sociopath has already had her fellow former inmate, firebug Joey Decicco, burn down the home of Sara McCloud, her gorgeous lawyer boyfriend's money-grubbing ex-wife, and Elizabeth now wants Sara and Sara's small son, Noah, dead. The authors smoothly bring together the various story lines, including a sharp subplot centered on Nic's breast cancer diagnosis. -- Publishers Weekly
My Review:  Lis Wiehl and April Henry have done it again!  A triple threat, triple home run of a read!  Having read Hand of Fate I couldn't wait to read Heart of Ice!
It you're new to the Triple Threat novels then let me introduce you to three friends:  Allison who is a prosecutor, Cassidy the TV news reporter and Nicole (Nic) the FBI agent.
Three close friends who love the Triple Threat Chocolate dessert!  They are once again involved in solving a case of arson and murder.
Then there are the subplots of this wonderful read:  Allison must confront here sister, Lindsay, and her drug addiction. Nicole (Nic) is faced with the possible breast cancer, surgeries and treatments, and Cassidy joins a boot camp class at her fitness center where she meets the instructor, Elizabeth.
Elizabeth is the epitome of deviously beautiful.  But people only see the beautiful outside package.  Is Elizabeth a threat or is she merely a pawn in this ugly scheme?!?!
Nicole's courage to face an unbeatable enemy, cancer, is at.times. a real tear jerker!  Going through the process of a possible mastectomy brings the three friends closer.
Three strong, courageous ladies ready to meet the challenges thrown there way with a little romance to sweeten the day.
Each of the Triple Threat Novels are stand alone reads; however, they are rather addicting when you get to know these ladies and want to follow their lives.  If you enjoy reading mystery/suspense then you'll want to read this book!
*This book was provided for review by Thomas Nelson/BookSneeze*
Posted by Tammy G. at 12:01 AM No comments: 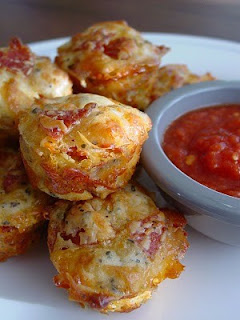 Pepperoni Pizza Puffs adapted from Everyday with Rachael Ray and Cassie Craves
1. Preheat the oven to 375 degrees. Grease a 12 cup muffin pan. In a large bowl, whisk together the flour, baking powder, Italian seasoning, salt and red pepper flakes (if using) ; whisk in the milk and egg. Stir in the mozzarella, Parmesan and pepperoni; let stand for 10 minutes.
2. Stir the batter and divide among the mini-muffin cups. Bake until puffed and golden, 20 to 25 minutes.
3. Meanwhile, microwave the pizza sauce until warmed through. Serve the puffs with the pizza sauce for dipping.
Posted by Tammy G. at 12:01 AM No comments: