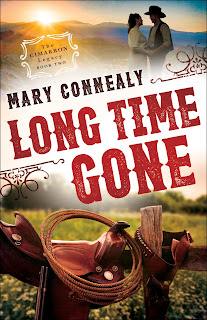 Book Description:  The Boden clan thought their problems had ended with the death of a dangerous enemy, but have they truly uncovered the real plot to take their New Mexico ranch? Rancher Justin Boden is now in charge. He is normally an unshakable and rugged man, but with his brother, Cole, shot and in mortal danger, even a tough man faces doubts. And it doesn't help that Angie DuPree, the assistant to the doctor trying to save Cole, is as distracting a woman as Justin ever laid eyes on.

With her and the doc's timely skills, Cole looks to be on the mend, and Justin and the rest of the Bodens can turn their attention back to the dangers facing them. It's clear now that everything that's occurred is part of a much bigger plot that could date back to a decades-old secret. Can they uncover all the pieces before danger closes in on them, or is the threat to the ranch even bigger than any of the Bodens could imagine?

My Thoughts:  Mary Connealy writes another great read!
Even though the Boden clan thinks their problems have ended with the death of their enemy, it seems that there is still plot to steal their ranch.  A ranch they have worked hard to cultivate with their blood, sweat and tears.
Justin Boden is a John Waynes type of character.  Tough, unshakable but then when a pretty and tough doctor, Angie Dupree, comes to care for his brother, Cole, Justin finds that he is distracted by her beauty.
As Justin and his clan try to figure out what is going, it seems that there is a silent danger that they are fighting against.
It seems that Mary Connelly is quite familiar with New Mexico and it's vast lands, as well as, the ins and outs of ranch life.  😊  The descriptions and people make the reader feel that he is right in the midst of the ranch life.
Mary Connealy pens a wonderful historical novel with western charm.  A wonderful western story!

*This book was provided for review by Bethany House*