The First Hostage: A J. B. Collins Novel by Joel C. Rosenberg 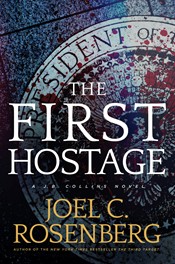 Book Description:  “The president of the United States . . . is missing.”  With these words, New York Times journalist J. B. Collins, reporting from the scene of a devastating attack by ISIS terrorists in Amman, Jordan, puts the entire world on high alert. The leaders of Israel and Palestine are critically injured, Jordan’s king is fighting for his life, and the U.S. president is missing and presumed captured.
As the U.S. government faces a constitutional crisis and Jordan battles for its very existence, Collins must do his best to keep the world informed while working to convince the FBI that his stories are not responsible for the terror attack on the Jordanian capital. And ISIS still has chemical weapons . . .
Struggling to clear his name, Collins and the Secret Service try frantically to locate and rescue the leader of the free world before ISIS’s threats become a catastrophic reality.

My Thoughts: I first read a novel by Joel Rosenberg when I read, Auschwitz Escape.  One of the BEST books I ever read!  I've been an avid reader of Mr. Rosenberg's books ever since.
Now The First Hostage is quite bit different in the story approach than the other two books I've read by Joel Rosenberg.  But, yet, the imagery, the action and the way the characters act and react are so life like, just like in the other novels I read by Mr. Rosenberg.
As I read The First Hostage it felt as this story were true.  Kind.of.gave me the chills as I read this story because the book seemed so accurate.
This is the second book in the J.B. Collins "series".  We first, met J.B. Collins in The Third Target.   J.B. Collins is a likable, adventurous news reporter who follows this case of the missing president of the U.S.
Collins reports the news as truthfully as he sees it.
But then, he is accused of a crime and must try to clear his name.
A lot of action! And adventure!  And, in my opinion a lot of truth.
The reader can tell that Joel Rosenberg has done his research.

*This book was provided for review by Tyndale*