Josiah for President by Martha Bolton 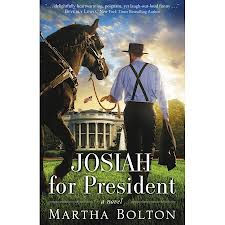 Book Description:  When former Congressman Mark Stedman throws in the towel on his presidential campaign, his only choice is to return to his home state and decide how to spend the rest of his life ... until he meets Josiah Stoltzfus, an Amish farmer from Pennsylvania. Stedman learns more from Josiah in a few hours than in his many years in office. He comes to the conclusion that someone like Josiah should be running the country. Not a career politician, but someone with a little old-fashioned common sense, someone who's not afraid of rolling up his sleeves and getting his hands dirty. Someone like Josiah Stoltzfus. Using his old campaign headquarters for a base, Mark Stedman determines to introduce a new candidate to America. He pledges to do everything in his power to make sure Josiah gets elected. But can a plain man of faith turn the tide of politics and become the leader of America, and what will he have to risk to do it?

My Thoughts:  I read this book right after our presidential election and thought WOW how so true to life! I love the way this book begins "America was sick.  She needed a miracle." (p. 11)
The story is about Congressman Mark Stedman and how he lost the presidential election.  Mark becomes lost using his handy, dandy GPS and not only gets lost in the middle of nowhere but is rescued by Josiah Stoltzfus, a kind Amish man.
Mark is enamored by the by the Stoltzfus life style and their peaceful way of living.
After he returns home Mark decides that what America needs is someone with true grit and courage....someone like Josiah!  So, Mark takes on the barrage of becoming Josiah's lead political manager; however, trying to convince the bishop that an Amish man should be president is another matter!
This wonderful story has humor, facts about the political arena, and makes  reader wonder . . . what IF an Amish man did decide to become president?  "They are good people." (p. 293)
I loved this read so much that the same day I received it, I read it through in one day!  It's a nice, easy read that keeps the reader turning the pages!
*This book was provided for review by Zondervan*
Meet the Author: 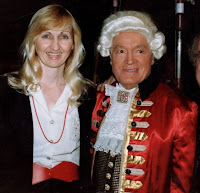 After writing her first "book" at age 9 about being the youngest of five, Martha grew up to become the author of 87 books, including her newest, Josiah for President. She was a staff writer for Bob Hope for fifteen years, and received an Emmy nomination for Outstanding Achievement in Music and Lyrics. She has also written for dozens of comedians and entertainers, including Phyllis Diller, Wayne Newton, and Mark Lowry.
The winner of four Angel Awards, Martha also wrote the scripts for the stage production of The Confession and Half-Stitched (music by Wally Nason, produced by Dan Posthuma and Mel Riegsecker). These plays are currently playing in Indiana, Pennsylvania, and Ohio. For additional information, go to www.bluegatemusicals.com, www.theconfessionmusical, or www.half-stitchedmusical.com
Bethlehem or Bust is a lively Christmas musical for children, which Martha co-wrote with Andy Cundiff, Darrell Bledsoe, and Ted Wilson. For additional information on this musical, visit www.bethlehemorbust.com
A Bear in the Burbs (music by Bill Bauer, script by Martha), premiered in Nashville, TN, and is available to schools and theater groups. Contact Martha at www.marthabolton.com for more info.
Martha also received a Dove award nomination for "A Lamb's Tale", a children's musical co-written with Dennis Allen. And her popular series of books for middle-agers (Didn't My Skin Used to Fit?, Cooking With Hot Flashes, and others) have addressed the subject of growing older in a fun and fresh way.
Posted by Tammy G. at 5:16 AM